Butterfly Qin made it to 19 days.

And in case you haven't heard, there was an amazing coincidence surrounding her existence. I am calling it a little miracle, but it was actually kind of big to me and what my friend Bob calls a “God-wink.”

Late summer last year, my passion vine from a seed pod that I'd liberated from a local university campus here in San Antonio got covered in caterpillars.
Stomachs on legs, they would eat EVERY leaf and even the stems. I would pick them off and toss them over to other plants, "There, eat that crabgrass instead," you know. Needless to say, I was really mad at them for destroying my vine. And when these spikey little monsters surfaced again early this Spring, I googled “orange and black caterpillars eating my passion vine” and the results stopped me in my cyber-searching tracks. These caterpillars were Agraulis vanillae larvae, commonly called the Gulf Fritillary butterfly. I also learned that the Passifloria incarnata (wild passion vine) is pretty much their only food source around these parts; well, so then I was remorseful for pitching them over to the weeds.

I had seen these butterflies briefly in the yard, but it’s hard to get a good look because they are very fast. At that point I started cultivating them because I knew I could get a good look and maybe take a few photos after they emerge from the pupa (eclose). After all, all butterflies have to hang around for a while after eclose.
Fast forward to July 10, 2020, and after some 20 pupates and releases: I name-tagged a recently pupated “Frit” after my Facebook and IRL friend Qin. I usually do not "name" the butterflies-to-be as actual people I know, but when I made the tag clip, my pen wrote “Qin.”

When butterfly Qin emerged on July 19, 2020, my family and I were down with Covid. I was actually laying on the floor shaking in pain with nausea watching this butterfly eclose on camera, hoping and praying it would hurry up so I could get out of the studio and go back to bed.

As I shook, I witnessed a just-as-haggard looking butterfly Qin eclose, then immediately leave the frame. That kind of bummed me, because they normally just hang as the wings grow and I was intending to capture that as well. It was strange that she “left the scene,” but hey, I guess everyone’s different. She seemed “diligent” and on a mission. And I felt about like she looked—a little beat up, figuratively.
I shared the video with Qin the person, placed Qin the butterfly in a large butterfly enclosure here in the studio (to keep her calm for the photoshoot I would attempt the next day), then I tapped out for the day.

The eclose was on Qin the human's birthday! There is absolutely no way I could have planned that out; Hooyah!! And on this day after eclose (July 20, 2020), I still planned to do the photoshoot of Qin the butterfly since my energy was kind of up and I needed to get her out into the world. Tick-tock. Adult Frit life is two weeks, max.

These butterflies can roost for 24 hours before feeding becomes an issue; keep them dark and cold and they kind of go on a temporal pause. But to my surprise, at 7:50 a.m. in the dark and coolness of my photo room, she is flying around wanting to party. Needless to say, this butterfly was the wildest I had ever seen here in the studio. No worries, I’ll just use my butterfly superpower techniques and get some great shots. “She’ll settle down alright.” Yeah, right.

Some Frits have let me shoot for up to three hours before we both get a little stir crazy. And just keep in mind, these butterflies have fully developed wings. If I am shooting the same day as eclose, I let them hang here on the photo table at least two hours before we shoot, or they overnight in an enclosure (like Qin) and are just as calm the next day. I need the wings to be as large as possible, for both the photo and for their flyability (for their outside time). But did Qin the butterfly bend to my butterfly whispering techniques? Barely, then NO. I was only able to shoot five photos. FIVE. That’s it. That’s 0.625% of what I am usually able to shoot. I took her outside and she bolted straight away. I even said out loud, “Well, what are the odds of seeing her again?” Then I went back to bed, because, well, SARS-CoV-2 was still befriending me.

During my illness with this novel coronavirus, each morning/afternoon I would go out and sit with my coffee or liquid IV stuff (ugh) and watch “the four amigos.” Four males that I raised and that had eclosed in a short timeframe together. They stuck together and flew together in our backyard. They would even fly around my head sometimes. It was like a fever dream. Surreal. After some days, that storm Hanna blew through, and the next day, only two amigos. Then a couple of days later, just one; he was gone the next day. Butterfly life is short indeed.

By this time the family and I were improving, but I was still in the “sit-around” phase of the illness. So I was out in the a.m. as usual and spotted a really old, haggard Frit trying to fly around the wild verbena that is very close to our porch- and our cats (caterpillars and felines). This one was trying hard, but flight (and sight, I believe) was no longer a possibility. So I picked her up (I could tell this one was female due to the size and wing coloration), and put her in the “baby caterpillar” enclosure- the one with a live Passaflora incarnata for the hatchlings and “tiny cats.” I took a reference photo, then when in to see if this was a returnee. Frits have a several noticeable (yet very subtle) patterns under their wings that are unique to each butterfly and with photos it’s pretty easy to match them up.

The males I release here always kind of “stick around,” like the four amigos. They check out the vine, looking at the caterpillars, then they "look" in the willows for females, they go to the verbena and scrounge for whatever is in verbena, and they fly around the tomato plants to taunt the zipper spider. I have only seen one other female from these stomping grounds return to the vine, so I figured this haggard little thing in the tiny cat enclosure was from far away. Maybe blew in with that blowy-rainy tropical storm Hanna.

Looking at photos... looking, looking… thousands here because I’ve been too weak to cull through them… then I open the Qin folder. Five photos, first one. Boom! Complete match! This is Qin!

She had been who-knows-where for 13 days. I released her on day two of her adult butterfly life, so this puts her right at the two-week mark. Her free time outside is over. Time to convalesce with some bananas and Gogosqueeze little lady. "And we’re gonna finish that photoshoot you didn't have the patience for!"

And finish we did. The first session was with the original haggard wings, but because she was still a wild child, she’d beat those wings to jagged used-to-be-wings (not photographed). So that night while she was calm I gave her a wing bob. She didn’t move and I kind of thought she was gone at that point. But the next day, she was up and beating those little wings... Looked like a moth at literally one-third of her original size.

We shot a little each day in her last few days, mostly her guzzling Gogosqueeze.

After the shoot on August 6, she was very slow-moving. I placed her in her tiny cylindrical netted enclosure on her little paper towel (Frits LOVE to sit on a paper towel, I do not know why), and she rested with her wings open; very unusual. Throughout the evening I checked in: same position, then in the morning, same position. She was gone.

Today I have her in an airtight container along with that very tiny dried rose that she posed on. It is a poignant scene that has a story, a story worth sharing, a story on which parallels can be drawn.

As I and my family were in a pupa/cocoon of sorts through the pandemic, random riots, and political mayhem, I did (and still do) find joy in these “winged-wonders” as human Qin’s husband, Mark, calls them. When I see one appear in the back yard, I am usually out to greet it, happy to see their (perhaps) return. With each one that ecloses here in the studio- whether the camera was rolling or not, I am delighted.

This God-wink with Qin the butterfly, as small and insignificant as it may seem to some who read this and those who will write it off as "just coincidence," was quite impactful on this end. But in all of this, I am indeed seeing the beauty in this gross 2020 version of the world, confident that there is a creative Creator in charge, confident that this messy middle we’re in will come to an end in a beautiful, amazing way.

Butterfly Qin made it to 19 days.  And in case you haven't heard, there was an amazing coincidence surrounding her existence. I am calli... 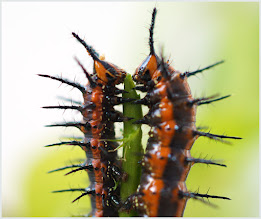 from the image archives:

This work by Duane Conder is licensed under a Creative Commons Attribution-NoDerivs 3.0 Unported License.
Based on a work at DC Global Concepts, LLC.